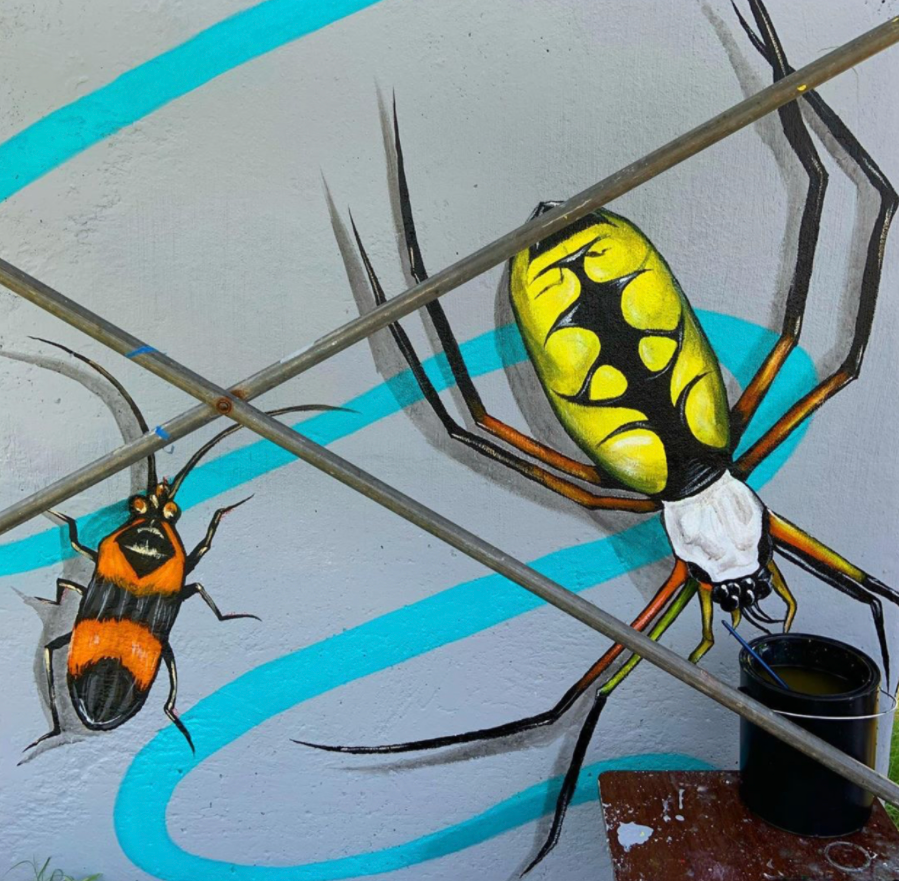 The Springtown artist does, however, believe in seeing the beauty in life – no matter how small.  “We need to have a better awareness of things that we take for granted,” Stiewig said. “There is beauty in very small things, and we need to pay attention.” 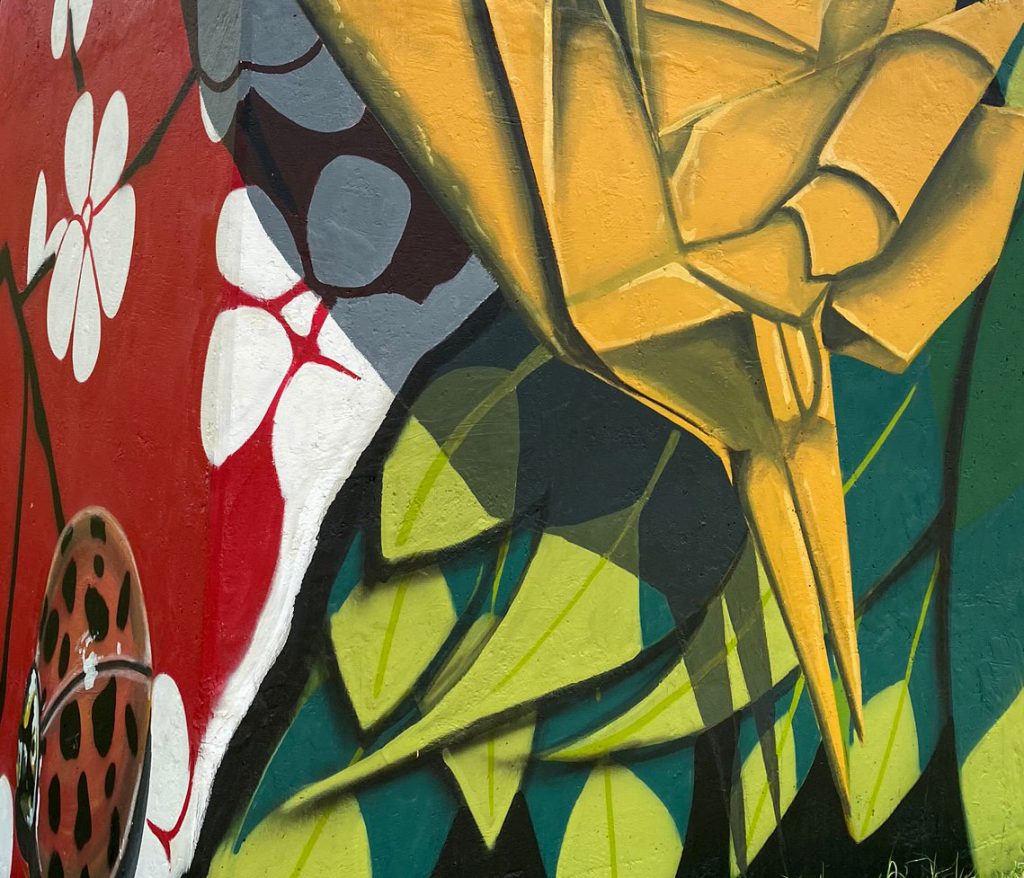 Look closely as you walk along the banks of the Trinity River and you might see all types of herons: Little Blue, Yellow-Crowned Night, or even Black-Crowned. 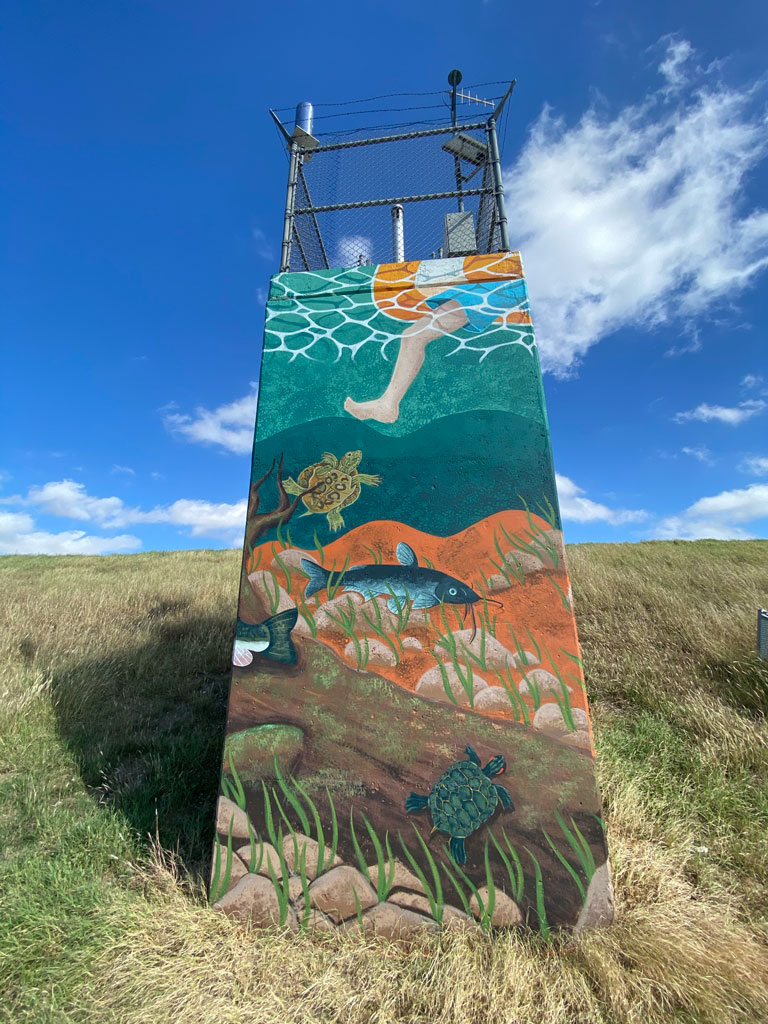 You need to go beneath the surface to capture the spirit of Audie Pope’s work. In her mural for the Trinity Trail gallery, “Sharing Spaces,” Pope decided to focus on the wildlife that primarily lives in the Trinity River, and not just along its banks. 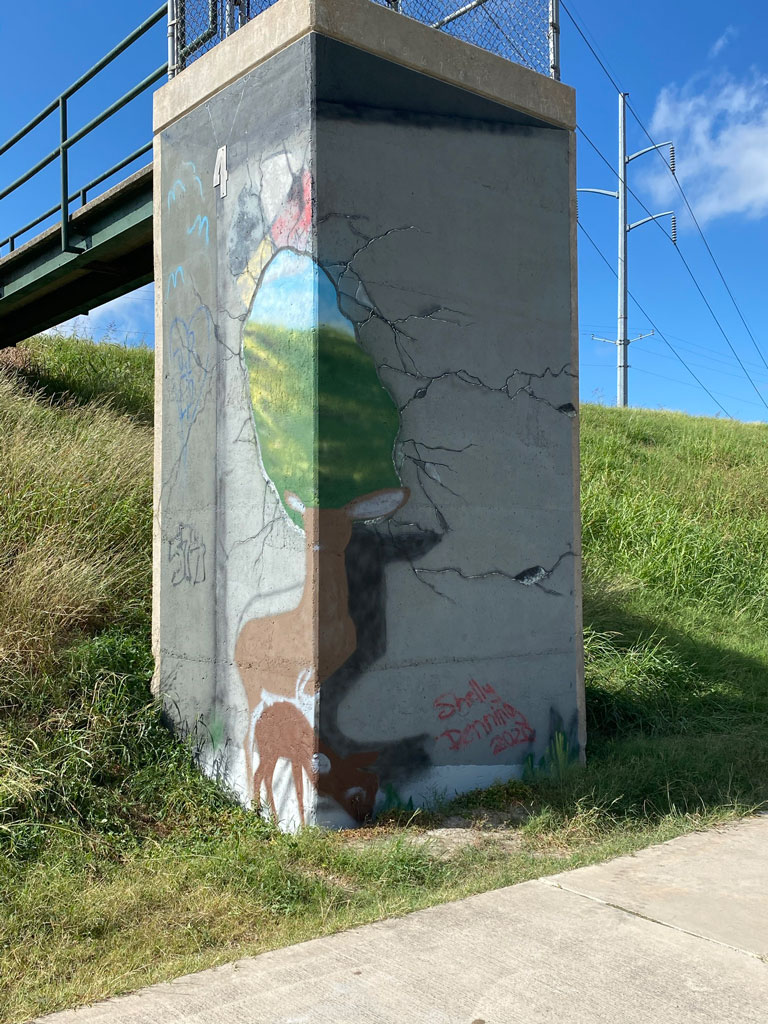 There’s something haunting, yet hopeful, about Shelly Denning’s mural “Monarch.” There’s a group of deer; the doe hovering over its fawn; the buck standing nearby. 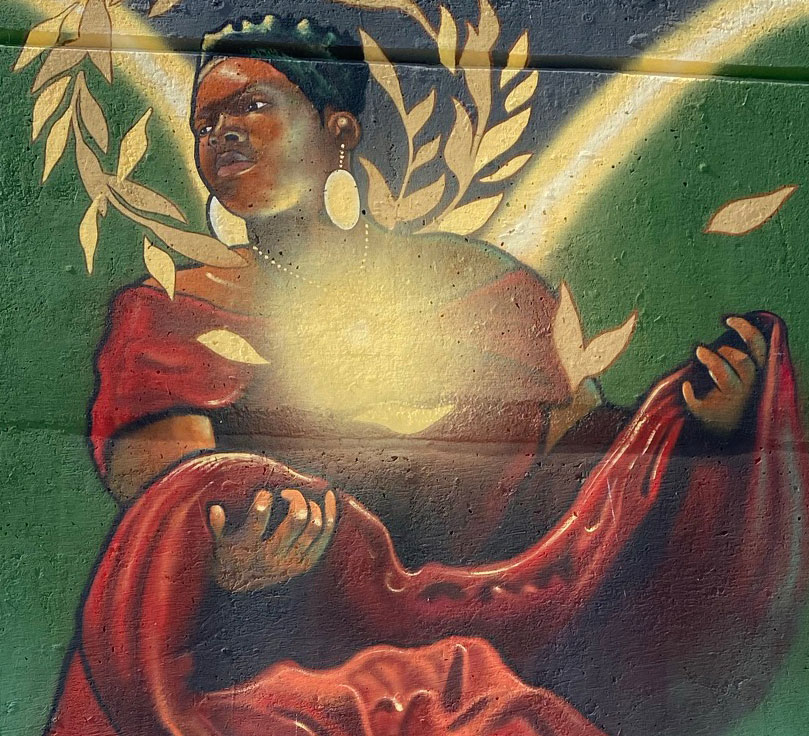 Being resilient is a common thread in J.D. Moore’s art. So it’s not surprising that the Dallas-based artist and tattooist intertwined the enduring influence of the Trinity River, the Trumpet Vine and Black women together as subjects in his mural. 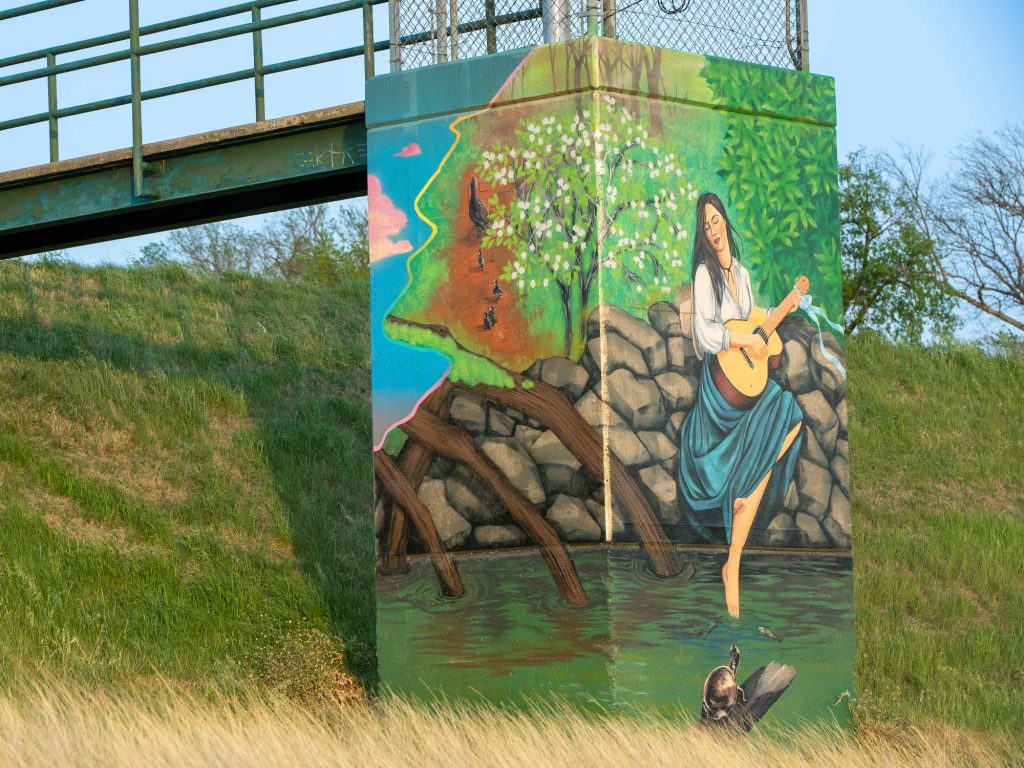 Stroll down by the Trinity River one day and you actually might catch Jana Renee seeking inspiration and solace. Long before being picked as an artist for the Trinity Trail gallery, she would go there, sometimes with her sister, sometimes alone, to play music or just to think. 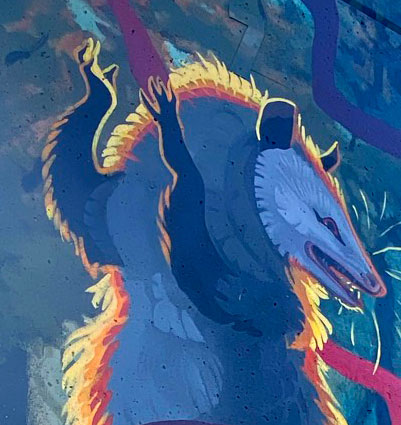 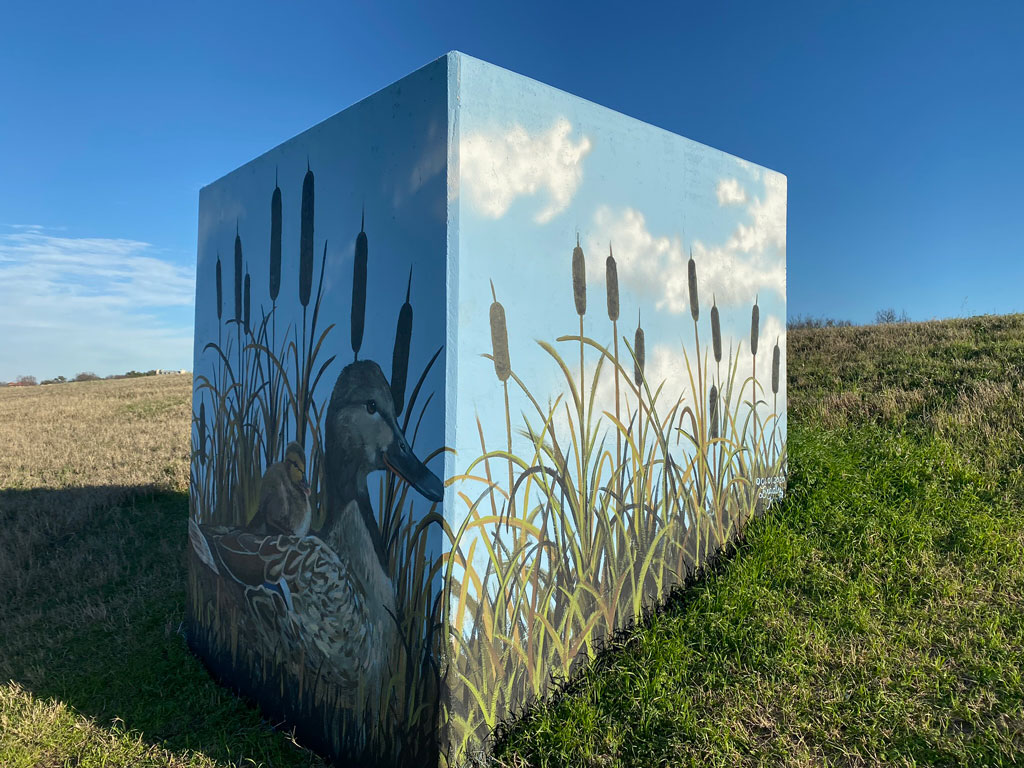 In “Cloud 9” Jimmy Jenkins’ Trinity Trail mural, a Great blue heron is launching itself from Trinity River banks, barely skimming over the cattails and reeds where a paddling of ducks is hiding. 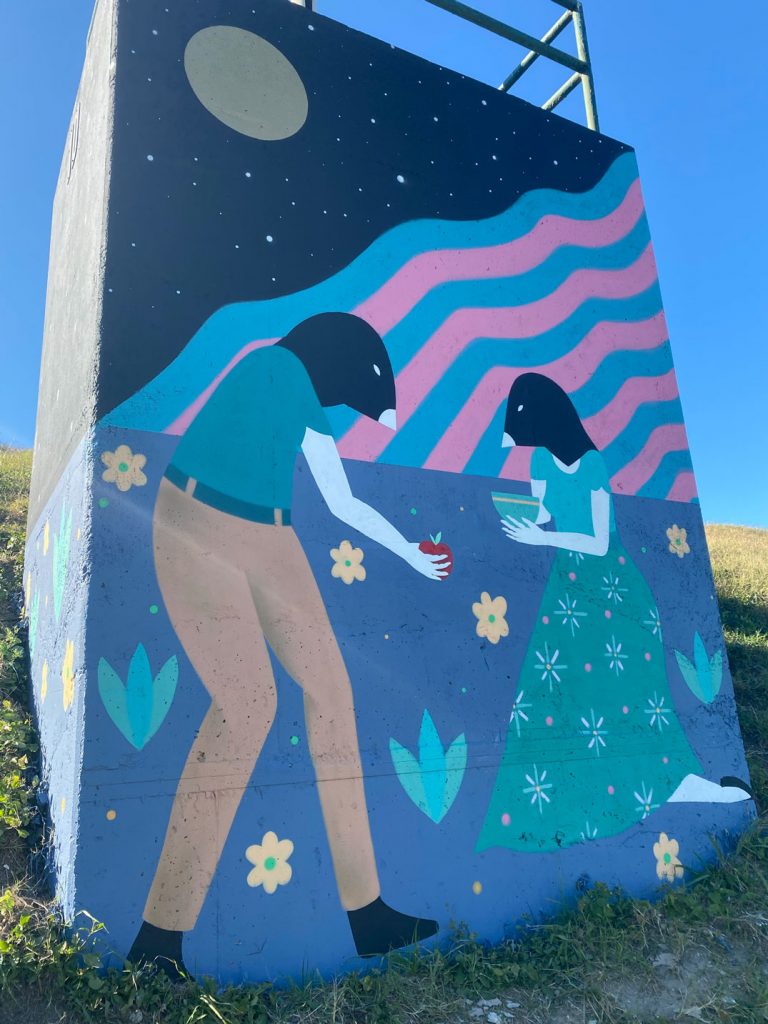 The moon looms through much of Adrian Brooks’ work. Drawn in phases, the moon – sometimes crescent, sometimes full – adds a luminescence to his art as he tries to create another world that includes bird-head figures instead of people. 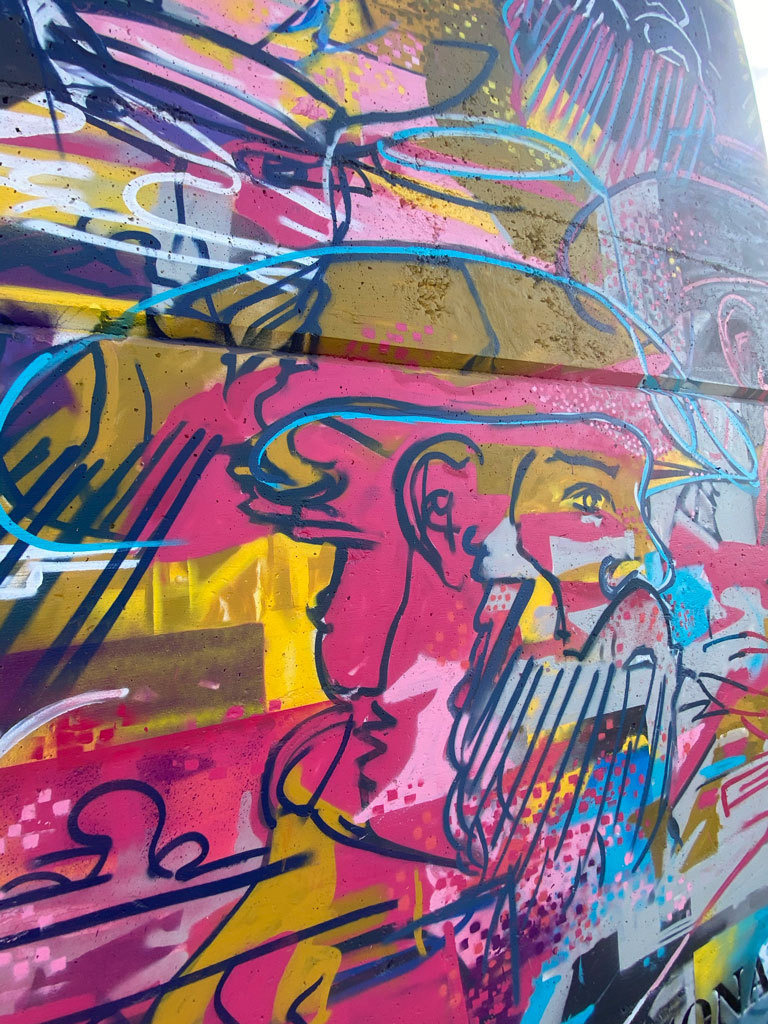 John Worley’s cowboy is not riding off into the sunset. He’s riding into the future. Worley, who earned his spurs working in the Fort Worth art scene, said his mural for the Trinity Trail gallery, “Cowboy Punk 2077,” honors Cowtown’s past while anticipating its future.

Get the latest info

Want to get weekly news updates about what’s going on at TRWD? Sign up today to learn how we improve the quality of life in the communities we serve!

For more than 90 years, TRWD has improved the quality of life in the communities we serve by providing a reliable and sustainable water supply, vital flood protection and an outstanding variety of recreational opportunities.

The Tarrant Regional Water District manages the trail system as a whole, providing access to recreation destinations along the river and throughout the city.